I love books from all genres, but right now I'm on a mystery, contemporary, and YA kick.  I have two cats, Monkey and Peepers.

Bonk: The Curious Coupling of Science and Sex
Mary Roach

I've been out of my blood pressure medicine for over a week and having arguments with the doctor over getting my script (the pharmacist has even cursed them out), I'm dealing with a claims error issue from same doctor for blood work billing, and I want something to decompress with and enjoy.

I keep thinking of trying the new Heidi one -- because mental illness is something in books I almost always want to read about and see how it's brought to life.  But then it's NA, omg the NA.  *whines*  Pretty much the only NA book dealing with depression I loved was Take the Long Way Home by JA Rock, which was almost perfection.

And then I'm wondering if I'm just jaded and grumpy and hating m/m or romance lately because truthfully?...I'm not really liking anything I'm reading.  I don't trust author reviews and pimping, or the gaggle of fans to rush to read what their bff authors are telling them to, I don't know if I can trust many reviewers anymore not because of rating inflations but I just think I don't love or want the same things anymore.  It's not new and there's not shiny wrapping paper over the genre and its inhabitants.  If you were placing me in reader years for this genre I'd be Sophia from The Golden Girls -- reading m/m on GRs since 2009 and reading m/m even longer than that.

I can't even muster a smile anymore when newer people gush about such and such author or such and such series.  I mean I'm happy for them; I wish I still had that enthusiasm, but I just don't.  I know of too many dramas and lies and bullshit.  I see too much lackluster editing or churned out story ideas.

I used to review like mad and I think I've reviewed 2 books this year.  I'm in a slump with my slump.

There are publishers that don’t pay for proofreading. There are those whose editorial fees are absurdly below professional rates, which makes you wonder who’s doing the work, and how fast they have to do it to eat. There are some that don’t pay editors at all and simply use people who do it ‘for love’, or, to put that in French, amateurs.  I’m well aware editing is a huge cost, of course, especially to small publishers. But if I go to a cake shop and ask for a cake, I don’t expect to be handed a bowl of raw flour, eggs and butter, on the grounds that ovens are just too expensive so they decided not to bake the damn thing.

Anyone read Lord of Scoundrels by Loretta Chase?  And if you did, would you think I would like it?  Considering reading it because I do miss m/f sometimes but I just am super ass picky about them.

I seriously want to drunk read this book.

I'm going to read Beguiled before I review Provoked, mainly cuz too lazy to write one now, but I'm not sure how I feel. On one hand, it's well-written and thought provoking in parts and on the other hand the "relationship" felt forced at times leaving me just as confused as David.

Also, I felt like David was poor Cinderella to Elizabeth's mother lol. 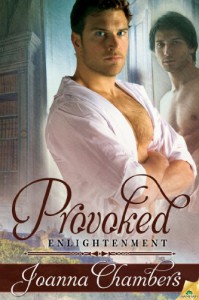 Somewhere around the 2nd chapter...

I'm not a history buff at all, but this isn't actually set during the Enlightenment era, correct?  I thought that was 18th century?  And I thought Romanticism was towards the later of the 19th century.  So I'm assuming this series is dealing with the aftermath of the Enlightenment?

I'm not trying to call the author out or be snarky; I'm genuinely curious because I want to try and understand as best I can what is going on. 5% in. It's still early, but I'm really enjoying this.

And first chapter in...I really smiled. There's something about Heidi's style that is very conversational, very natural. I can imagine sharing that coffee with Walter.

Here's hoping I enjoy the rest of the book. This looks different and interesting and well...mildly challenging.  Hopefully others will join me.  :) Do authors even try anymore??

For example, Dom is Captain in police force, against relationships, leather clubs, tightly wound, cock twitching and expanding, groaning OUT LOUD at dirty images of sub laid out in front of him, creepily following the other guy around, growling, getting jealous within minutes of meeting other guy.

On the other spectrum, Daniel (the sub)...oh mahhhh GAWD is so fucking annoying. Let's see: trips and falls on ppl at first mention in book, trips and trips and trips and trips (I fucking get it, author), drops his wallet twice, money flies out, he gets lost, he gulps A LOT (BC he's clumpsy and shy, get it?), he almost dies taking off his sweatshirt and falling off bus, he blushes A LOT, he's 33 but looks 21, no job, super flexible, doesn't have sex unless in relationship (says this within 2 min of meeting Dom), let's Dom grip his neck in controlling manner within minutes, doesn't want to break his no sex rule so he gets Dom naked and massages him (oh shut up).

Whhhhhhyyyy? Why am I reading versions of this bullshit every day.

Thoughts on this Discussion???

I'm feeling stuck and sore and cranky today. What to distract me... So I'm starting tonight a buddy read with 2 friends.  We're reading Fallocaust - all 970 pages and considering how I read slow as fuck normally, this should prove interesting.  Course I'm far less distracted when I'm drunk, and considering these dudes eat people and shit, I'm planning on getting massively drunk tonight. This book is awful and weird and did I mention what the fuck. I'm going to have to drunk review this, if I can even keep going. Da fuq. Oh. My. God. I want to slap the fuck out of Corey. Maybe it's the field where I work but I find what he does and his attitude to be...just ugh!! Just ugh.

However, there was this small moment Desmond has with him when Corey drops him off that I loved. Not bc of Corey but bc I saw a glimmer of something in Desmond.

I finished the thing

Remember that Avengers/Fish & Chips crossover that I was going to write? I finished it. It turned out a lot less Fish & Chips than Avengers, but I think that is probably for the best. For those of you who said they'd read it when it was done, here it is: